TAUNTON, Mass. — On February 1, the eve of the feast of the Presentation of Jesus in the Temple, area Consecrated Religious gathered for a day of reflection, prayer and camaraderie at St. Andrew the Apostle Church in Taunton. The reflection was guided by Father Thomas Carzon, O.M.V. (Oblates of the Virgin Mary), currently director of Formation at Our Lady of Grace Seminary in Boston.

Father Carzon focused his reflection on the awareness and recognition of the presence of the Lord as illustrated in the Scripture passage of the feast of the Presentation of the Lord. The scene highlights the presence of two prophets, a man and a woman at the Temple in Jerusalem, Simeon and Anna, attentive to God’s message and to His will for the people of Israel. As Mary and Joseph come into the temple to fulfill the directives of the Law of Moses, to present their first-born infant male, both prophets immediately recognized in the Child Jesus the very presence of God.

The role of the prophet is that of “recognizing” God’s presence and wishes so as to make them known to the people. In all times prophets have been chosen by God to fulfill this role. In the Scriptures, prophets were afraid and doubtful at being chosen for this role and they often expressed their fears and gave excuses. God however, reassured them and gave them the wisdom they needed to discern His ways.

Simeon, recalling God’s promises and faithfulness finds joy in their fulfillment on this day. He could now die in peace knowing that God in the flesh had come to His people. Anna the prophetess, who had spent her life at the temple awaiting the coming of the Lord, transforms her anxieties and waiting into new hope.

Consecrated Religious fulfill that prophetic role in the Church. Pope Francis addressed the Superiors General: “Radical evangelical living is not only for Religious: it is demanded of everyone. But Religious follow the Lord in a special way, in a prophetic way.” This is the priority that is needed right now: “to be prophets who witness to how Jesus lived on this earth, a Religious must never abandon prophecy” (Nov. 29, 2013). “Prophets know God and they know the men and women who are their brothers and sisters. They are able to discern and denounce the evil of sin and injustice. Because they are free, they are beholden to no one but God, and they have no interest other than God” (Nov. 21, 2014).

The mission of the prophet is awareness of the presence of God, concluded Father Carzon. May we approach others and say God is with you, in you in this circumstance of life, even in suffering in a prophetic witness of joy: “All for God with a smile transformed into hope”.

Bishop Edgar M. da Cunha, S.D.V., and Religious priests along with Father Edward Murphy, co-pastor of St. Andrew the Apostle, who hosted the group, concelebrated at the closing Liturgy, which was then followed by a luncheon. 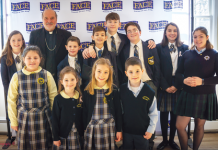 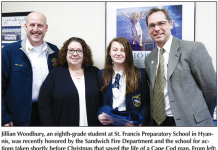 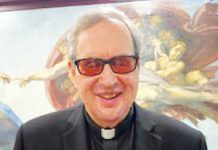 Candlelight procession and Mass for Peace in Fall River is October...

Why would ‘the blind’ need a Guild?