NEW BEDFORD, Mass. — In an effort to raise the spirits of faithful across the diocese during the Coronavirus pandemic, two diocesan priests recently decided to raise themselves and the ultimate Spirit — Our Lord, Jesus Christ — literally thousands of feet into the air.

Around 1 p.m. on Sunday, March 22, Father Chris Peschel (right), parochial administrator of Our Lady of Grace Parish in Westport, and Father Jay Mello, pastor of St. Michael and St. Joseph parishes in Fall River, boarded a private plane — dubbed Angel Flight 1961 — at the New Bedford Municipal Airport and took a 90-minute journey from one end of the diocese to the other, bringing with them a gold monstrance containing the Blessed Sacrament.

“A priest in another part of the country had done it and I thought it would be a new way to bring the blessing of the Blessed Sacrament to the people of this diocese,” Father Peschel told The Anchor. “Knowing this was the first Sunday that our churches were closed and that people were deprived of being able to receive the Sacrament and being able to go to Sunday Mass … there was a lot of hurt and angst and I just wanted to be able to — in one way or another — bring the blessings of the Blessed Sacrament to them.”

Knowing one of his parishioners, Donald Stockwell, was a pilot, Father Peschel approached him about the idea, and he was immediately onboard. Stockwell then enlisted the help of another pilot, Richard Canastra, because he had a plane that was “bigger and faster,” according to Father Peschel.

“Then Don said there’s enough room if you want someone else to come along, so I asked Father Jay Mello to come with me and he was most willing to come along with us,” Father Peschel said.

“It was all Father Chris’ idea and planning,” Father Mello told The Anchor. “He gets all the credit for that.”

With Stockwell and Canastra at the controls and Christ as their co-pilot, the two priests flew out of New Bedford, looped around Fall River, Westport and Dartmouth, then flew out over Martha’s Vineyard and Nantucket, back up the arm of Cape Cod, traveled along Route 495 towards Raynham, Taunton, Mansfield, North Attleboro, and then cut back towards Providence, R.I. to fly over Attleboro, Seekonk, Swansea and Somerset, before heading back to Fall River and then returning via Freetown, Acushnet, Mattapoisett, Marion, and Fairhaven.

“We tried to fly over all of the towns that our diocese encompasses,” Father Peschel said. “We prayed the Rosary up there, the Divine Mercy Chaplet, and we had some deliverance prayers that we were saying, just recognizing that a lot of people are living in fear that this sickness is out there and just trying to bring a little bit of hope.”

Thankfully, neither priest had a fear of flying and both were comfortable traveling aboard the small commuter plane.

“There were a couple of spots where it got a little bumpy because of the wind, and of course you’re in a small airplane that only sits six people,” Father Peschel said. “But there was an element of it that was a bit of a thrill, too. Of course, we were up there really to do the work of the priesthood — to bring that hope and I think that that was definitely accomplished.”

For Father Mello (left), it was also another creative response to a difficult situation.

“In one sense, it is very difficult to be distant from the people and to have our normal routine and normal ways of ministering restricted, but it has also provided us opportunities for those things as priests we often wish we had more time for — especially prayer, reading, exercise, etc.,” he said. “It has also provided great opportunities for being creative and using social media for reaching parishioners to catechize, evangelize and encourage people during this struggle.”

With the ongoing threat of the COVID-19 virus forcing everyone to exercise social distancing measures and remain at least six feet apart, priests across the diocese have been forced to find other ways to stay connected to their parishioners.

“Priests have to think outside the box,” Father Peschel said. “It’s just forced me to do things differently. It’s forced me to do what I can through my phone. It’s killing my phone battery — it’s almost dead by 3 p.m. — but you can’t give up. You’ve got to press on and you’ve got to keep giving people hope.”

To that end, he has been posting daily Mass celebrations on the parish website which have received upwards of 1,000 views.

“I definitely don’t have a thousand people at daily Mass every day, but people are sitting at home and they’re seeking the grace of the Sacraments or at least some word of encouragement and hope,” he said. “Obviously, the ministry is very different, because so much of what we do as priests is person-to-person and we can’t get close to people or gather groups of people together.

“It’s obviously not ideal because I think there’s really something to be said for a personal ministry and being there, face to face. But this is an OK substitute in the meantime, and I’m glad people are taking advantage of it. I get emails and messages all the time from folks just saying how appreciative they are that it’s even being done.”

“I have been using social media for some time to reach parishioners and those who are estranged from the Church,” Father Mello said. “I think it is a great tool, but I also believe strongly that while it is creative and innovative, it does not and cannot replace gathering together in our parish church to worship together and  — most especially — to receive Holy Communion, the source and the center of our lives.

“It is certainly keeping people from feeling alone and isolated. Let’s just pray the Internet doesn’t go down.”

Like everyone else, diocesan priests have had to adjust to the “new normal” in light of the pandemic, and it’s been especially challenging during this otherwise busy season of Lent.

“We had daily Confessions and Eucharistic Adoration planned and we were going to be having a Lenten mission the last week of March into April, which had to get called off,” Father Peschel said. “These things that were going to be Spiritually-enriching for people in the run-up to Easter, all of a sudden got the brakes put on them because of what’s going on in the world. But I think it’s helping to remind people, no matter what age they are, that there are still means by which we can be Spiritually-enriched by using what’s available to us in technology.”

“The Eucharist is the source and summit of our lives and many Catholics are suffering greatly by not being able to receive Our Lord in the Eucharist,” Father Mello said. “I’m blessed as a priest to be able to celebrate Mass every day and have access to Holy Communion, but my heart breaks for those who truly desire it and are not able to receive it.”

And just as every dark cloud has a silver lining, Father Peschel admitted he’s been able to get a few unfinished items off his to-do list during this unexpected downtime.

“I mean it has certainly given everyone the time that they always said they never had,” he said. “I built a little chapel in the rectory. I had all this stuff ready to go for it, and it had been sitting in a pile and it gave me an opportunity to just kind of work on that house project that had been on the back burner up to that point.” 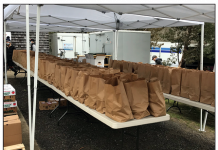 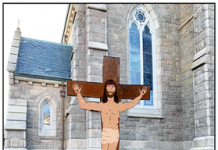 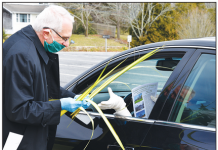 Visiting the school of courage