Father Booth, 27, is the son of Harry and Mary Ann Booth of Dartmouth, where he grew up with his two brothers and two sisters. The new priest is a 2012 graduate of Bristol County Agricultural High School in Dighton. He graduated in 2016 from Providence College in Providence, R.I., with a bachelor’s Degree in Philosophy before entering St. John’s Seminary in Brighton, Mass., where he completed his priestly formation this year with a master’s degree in Theology.

Father Booth hopes eventually to serve as an active-duty Navy chaplain with endorsement and faculties from the Archdiocese for the Military Services (AMS), U.S.A. Under the standard “Co-Sponsored Seminarian” agreement between the AMS and his home diocese, Father Booth will spend the next three years gaining experience as a priest, providing pastoral care to the faithful of Fall River before seeking admission to active duty service.

Father Booth said he was inspired to pursue a vocation through the influence of his Catholic upbringing. “Growing up,” he said, “my parents were strong teachers of the faith and I had wonderful examples of happy, holy priests. As a kid, serving at the altar had a significant impact, and as I grew older, time spent before the Eucharist in adoration was a great consolation. All this naturally developed into a love for God and His people. Within that context, I started to feel a call to the priesthood.”

At the same Mass on Saturday, the Reverend Mr. Peter R. Scheffer, Jr., a 59-year-old retired U.S. Army lieutenant colonel and alumnus of the United States Military Academy at West Point, was ordained a transitional deacon in preparation for priestly ordination next year. Although the Rev. Mr. Scheffer does not himself plan to serve as a military chaplain, he is among a substantial percentage of incoming Catholic U.S. priests who have military backgrounds.

According to an annual Survey of New Ordinands to the Priesthood conducted by the Center for Applied Research in the Apostolate at Georgetown University, anywhere from four to 10 percent of newly-ordained U.S. priests year in and year out have military backgrounds, and up to 20 percent or more come from military families. The AMS is now busy tapping this source for prospective chaplains to relieve a desperate shortage of Catholic priests currently on active duty in all branches of service. The Vocations Office is focusing attention on active-duty servicemen expressing an interest in the priesthood, inviting more qualified candidates to join the Co-Sponsored Seminarian Program to become chaplains.

Thanks in large part to the support of U.S. bishops and religious superiors, along with increased awareness and discernment opportunities, the number of co-sponsored seminarians has risen from seven in 2008 to 48 today.

The AMS, which receives no funding from the government and depends entirely on private giving, is now looking for ways to fund a fast-rising seminary bill, now projected at more than $5 million over the next five years. Donations can be made at www.milarch.org/donate.

Young men interested in discerning a priestly vocation, and the vocation within a vocation to serve those who serve in the U.S. military, can find more information at www.milarch.org/vocations, or may contact the Vocations Director, Father Aidan Logan, O.C.S.O., by email at vocations@milarch.org or by telephone at 202-719-3600. 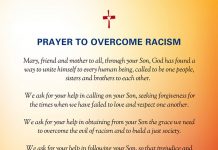 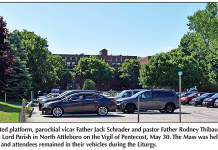 The Good, the Bad and the Beautiful

With Christ as co-pilot, priests bring blessings during diocesan flyover

A hand up to walk together in kindness