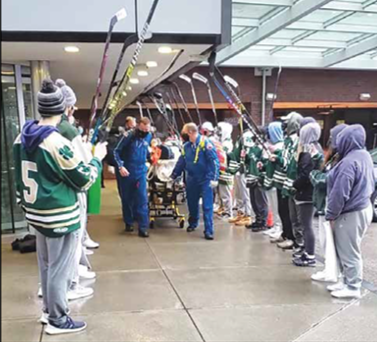 ATTLEBORO — AJ Quetta, a member of the Bishop Feehan High School ice hockey team, suffered a serious spinal injury in a game on January 26. Since then, he had been receiving treatment at Mass. General Hospital in Boston. On February 16, AJ was transferred to the Shepherd Rehabilitation Center in Atlanta, Ga., considered to be one of the premier facilities in the country for the treatment of spinal cord injuries.

The Shamrock team, wearing game jerseys, traveled to Boston, forming an honor guard with raised sticks, to see off their friend and comrade, as he was taken to a BostonMed Flight jet.

A few days later, his teammates took to the ice to play cross-town rivals North Attleboro High School in a fund-raising event. The game was not on either teams’ schedule, with only conference games being played during COVID-19. But the ice hockey family across the country is a strong force. The North Attleboro squad wanted to help out a fellow player and, thus, the game was scheduled, with a limited number of fans in attendance.

Before the game, AJ sent a video to his teammates, rivals, and all those supporting the Quetta Family since the injury.

With a strong voice, AJ said, “Hello everyone. I would just like to thank you for your support. What’s been going on lately is crazy. I don’t have words to describe how awesome you people are and how supportive you’ve been for me. You all give me a reason to keep pushing and keep fighting. It’s awesome.”

AJ singled out his Shamrock teammates: “I’d like to thank the boys from the team, especially. I miss them like crazy. I would do anything to get back on the ice with you guys. I know you’re playing North Attleboro tonight. So, good luck. And again, just thank you everybody. It means a whole lot.”

AJ’s dad, Anthony, also thanked everyone for the incredible wave of care and love shown by way of prayers and financial support. “Hi everyone. I just wanted to reach out to you and thank you for all the support you have given us,” said Anthony. “This support means so much to AJ and my family. All the text messages, all the Facebook posts. It keeps us moving forward, keeps our head in the game. I just wanted to thank you all for all that you’ve done. It’s just been awe-inspiring.

“AJ is doing well. He’s fighting hard. The support that you’ve given us is motivating him to fight harder every day. Just know that we are receiving your prayers and your support, and we love you all very much.”

In a recent interview with The Anchor, Bishop Feehan High School President Tim Sullivan said that it’s hard to believe the injury occurred a bit more than a month ago. “Even though time has passed, this is not going away, but the momentum to help AJ and his family is a strong now as it was in the beginning.”

Sullivan said it showed the level of compassion and camaraderie of the local hockey community with North Attleboro wanting to pitch in to help with the fund-raiser game on February 20. “It wasn’t a regularly scheduled game, but North Attleboro High School was incredible,” added Sullivan. “They donated pre-game warm-up jerseys to the Shamrocks with AJ’s number 10 on the back. “Something in this whole ordeal has struck the hearts of so many people. The Feehan team had game jerseys with ‘Quetta’ on the back and ‘AJ’s Army’ patches on the sleeves.”

Sullivan said AJ’s mom, Nicole, was at the game. “She was remarkably great. She is strong, positive and hopeful.”

Sullivan also pointed out the Feehan hockey coach Kevin Dunn has been a rock of support for his kids.

When asked about how the campus is coping, i.e., the teammates, coach, students, faculty and staff, Sullivan said, prayer time. The schedule is 24/7.

“That is an example of how great a role the diocese plays in the lives of its people.”

The prayer schedule originally started within the diocese and is now available at the AJ’s Army website. Choose “Supporters” on the top menu and select “Pray for AJ,” to schedule a time or times.

Human nature being what it is, sometimes, as time passes, things can become a bit more distant and not as much in the forefront. “The need for prayers and financial support goes on,” said Sullivan. “AJ and the family need prayers and support and it’s also important to pray for the doctors and scientists as they work to treat a very difficult injury.”

Everyone can support, spiritually and financially, at the AJ’s Army website.

The SMaSHing success of Catholic education and tradition

Members of diocese invited to virtual Biblical walk through the Mass