FALL RIVER — Bishop Edgar M. da Cunha, S.D.V., will ordain four men as transitional deacons at a Mass at St. Mary’s Cathedral in Fall River on Saturday, May 22 at 11 a.m. The Mass will be live-streamed on the Diocese of Fall River’s Facebook page. The four men, Matthew F. Laird, William J. O’Donnell III, Gregory K. Quenneville, and Laurent M. Valliere, will be entering their fourth year of seminary studies this fall and are scheduled to be ordained to the priesthood for the diocese sometime in 2022.

Laird, 28, is the son of David and Kathleen Laird. He lives in Sandwich and his family are parishioners at Christ the King Parish in Mashpee. Laird is a 2011 graduate of Pope John Paul II High School in Hyannis. He received a degree in biology from College of the Holy Cross in Worcester in 2015.

During his college years Laird was able to work an internship at St. John the Evangelist Church in Pocasset which helped strengthen his sense that the Lord was calling him to the priesthood. He entered St. John’s Seminary in Brighton where the formation has helped him grow. Due to some underlying health issues, Laird took a year away from the seminary to serve at Holy Family Church in East Taunton which was a great blessing for him and the parishioners there. Like Valliere, Laird has a gift for playing musical instruments and he is part of a jazz band with Valliere and two priests which they call Vatican III.

O’Donnell III is the son of Patty O’Donnell and the late William O’Donnell Jr. O’Donnell hails from Harwich, with his home parish being Holy Trinity in West Harwich. O’Donnell is 41 years old. After graduating from Harwich High School, he attended Stonehill College in Easton, receiving a BA in marketing in 2000.

Over the years O’Donnell had grown in his faith through prayer, the Sacraments, and especially through the Mass. He also took some classes in the Theological Institute for the New Evangelization in Boston in 2012. Over the years friends and priests have encouraged O’Donnell to consider the priesthood and to listen to the Lord if He is calling. After a journey of sensing the calling, stepping towards the call but then struggling with taking the step to enter the seminary, then having care for the family business after his father’s death, he then took the leap of pursuing the priesthood and entered St. John’s Seminary.

Quenneville is from South Attleboro and his home parish is St. Therese of the Child Jesus in South Attleboro. Quenneville, 36, is the son of Donald and Elizabeth Quenneville. A graduate of Attleboro High School, he later went on to receive an associates degree from Massasoit Community College in Brockton; a bachelor of science degree in psychology from the University of Massachusetts, Amherst, in 2007; and his masters in social work from Rhode Island College in Providence, R.I., in 2012.

Quenneville worked in Brockton for the Veterans Association. After college is when his Catholic faith became much greater. His sense of a calling to the priesthood intensified beginning in Lent of 2014, especially through his experience of attending daily Mass. Also in his profession of counseling people, he has discovered the joy of working and guiding many different personalities and in different age groups and is very comfortable with the thought of carrying this out as a priest. Many have supported Quenneville seeking to enter the seminary and becoming a priest. He has a strong certitude that the Lord is calling him and embraced the call and entered seminary

Valliere, 39, the son of Laurent and Maureen Valliere, is originally from West Warwick, R.I. He is a parishioner of St. Stanislaus Parish, part of the Catholic Community of Central Fall River. Valliere is a 1999 graduate of Tollgate High School in Warwick, R.I. In 2003, he graduated from Fairfield University in Fairfield, Conn., with a BA in religious studies.

Over the years Valliere had that growing sense that the Lord was calling him to be a priest. He entered St. John’s Seminary and after a few years he took some time away from the seminary as the clarity of the calling to the priesthood was not there and he returned to teaching high school, for which Valliere has a gift. After teaching for a few years he still had that sense the Lord was still calling and by God’s grace the strengthening of the call came and he returned to studying for the priesthood. He still fosters his talent for music and along with Laird as they are part of the (soon to be complete) clergy jazz band Vatican III where Valliere plays the bass guitar.

All four men are studying at St. John’s Seminary in Brighton, and recently completed third theology. 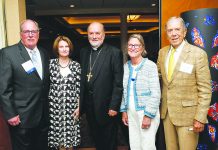 Martyr of the Sacrament of Confession

Synod seeks to involve everyone

Preparing for the inaugural World Day of Grandparents and the Elderly

This lovely lady gave me this old guitar

The soul of compassion