Do you own a bible? Have you ever shopped for one? Have you noticed how many different varieties there are? What’s the difference? Does it even matter? How does one choose?

First of all, I am not a Bible scholar. This will be a high level overview. Hopefully this presentation will help you choose a Bible or help direct you to an appropriate online resource that can help you pray and study.

While there are so many experts in the field of Bible translations, even the experts have varying opinions and often disagree. Of particular concern is that there are some experts who have a doctrinal agenda. They push a particular translation that aligns with their religious beliefs.

Catholic and Protestant religions each have distinct views on the meaning and the authority of the Bible. The Protestant Reformation was inspired by the writings of Martin Luther. The Reformation caused a split from the Catholic Church. Luther wrote that the Bible is the central source of religious authority and that Salvation is achieved through faith alone and not by good deeds. Luther also wrote that the Bible is the “Sola Scriptura,” He said the Word of God is all you need. Only Scripture.

While Catholics treasure the Holy Scripture, we do not base our beliefs on the Bible alone. Along with the Bible we embrace the traditions and teachings of the Roman Catholic Church. Catholics and Protestants have a different view on the nature of the church. The word catholic means universal. The Catholic Church teaches that Christ’s Church “subsists” in the Catholic Church, although there are elements of Christ’s Church in other churches (the Eastern Orthodox) and ecclesial communities (the Protestant churches).

Protestant churches are often also called “Evangelical,” meaning ”according to the Gospel.” They do not make up one universal Church. There are thousands of different Protestant denominations around the world.

Protestant Bibles have 66 books. Catholic Bibles have 73 books. The Catholic Old Testament has everything the Protestant and Jewish Old Testament does, with the addition of the Books of Tobit, Judith, Wisdom, Sirach, Baruch, 1st and 2nd Maccabees, extra chapters in Daniel, and extra verses in Esther.

Jews and Protestants think of those extra books as “apocryphal.” That means they view them as stories with doubtful authenticity but widely circulated and thought to be true. Catholics believe these Old Testament books are part of the canon of Scripture and inspired by the Holy Spirit.

When Protestants scholars were asked, “Why did you remove those books from the Bible?” they replied, “We didn’t remove them. They were never in there.” Clever answer!

Don’t be confused with a Google search that returns the statement that the King James Version (KJV) is the most accurate Bible translation in the world. It is only one of the many best-known translations.

Formal equivalence vs. Dynamic Equivalence — A Matter of Style

Dynamic Equivalence is a thought-for-thought translation. It favors a more natural rendering of the text in the modern language by not insisting on conformance to the grammar of the original language. It makes for easier reading.

There are many computer programs and websites that allow you to study the various Bible translations side-by-side. However, you won’t find the NABRE Catholic version in these programs or online. That’s because the New American Bible Revised Edition is not in the public domain and is copyrighted. The copyright secures the integrity of the text so that individuals may not introduce changes without permission. The licensing fees help to provide funds for Scripture scholarship and other educational needs. So many study sites and programs do not want to bear the cost of including the NABRE in their work among the translations that are freely available for reprinting. The NABRE is freely available on the U.S. bishop’s website for personal use. Links are provided later.

Here is a list of the various translation styles.

NASB — New American Standard Bible. Thought to be one of the most literal translations.

NABRE — New American Bible Revised Edition. This is the translation used at Mass in the United States.

The following translations are approved by the U.S. bishops to be used by Catholics for private prayer and study.

So You May Believe, A Translation of the Four Gospels, Alba House;

You can find this information on the U.S. bishops’ website at https://www.usccb.org/offices/new-american-bible/approved-translations-bible.

You may have heard about the Word On Fire Bible promoted by Bishop Robert Baron. This is actually a New American Bible Revised Edition (NABRE) translation with extensive commentary by the bishop and others. It is intended for new readers of the Bible.

Approved for Liturgical Use

Since May 19, 2002, the New American Bible Revised Edition is the only English-language translation that may be used at Mass in the dioceses of the United States, except for the current Lectionary for Masses with Children which remains in use.

The United States Council of Catholic Bishops maintains a copy of the NABRE translation of the Bible in English and in Spanish on their website. You can view this anytime for free.

This link will take you to a page organized by the Books of the Bible: https://bible.usccb.org/bible.

This link will take you to a page organized by Daily Readings for Mass: https://bible.usccb.org/.

Where do we go from here?

There is no denying that the Word of God speaks to us through the many translations of the Holy Scripture. Even translations that are not approved by the Catholic Church can move us to a deeper understanding of our God. Since we are Catholics it makes sense to embrace an approved translation for several reasons. It aligns more completely with Church teaching. It provides a fullness of understanding and a thoughtful use of modern language to accurately convey meanings. Of special concern is that the NABRE edition is the translation used at Mass. With this in mind it makes sense that you consider a NABRE translation for your personal Bible. What you read, study and pray at home will be the same exact text you will hear proclaimed at Mass.

If you are a religion teacher, using the NABRE translation in your lessons is a powerful way to connect your lessons to the Liturgy of the Mass by using the exact same text in your class that will be proclaimed at Mass.

In general, all Bible translations are good. Think of a Catholic approved translation as set apart from the fold and containing a special fullness and richness not found at the same level in the others. Think of it as aligned to your Catholic identity.

Rick Swenton is a parishioner at St. Pius the Tenth Church in South Yarmouth and is a member of the choir and a cantor. He has a certificate in Lay Ministry from the Archdiocese of Hartford with a focus on Liturgy and Music. He is a published church music composer. He resides with his wife, Gail, in South Dennis. 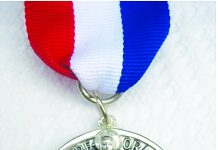 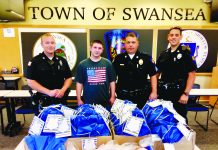 Photos from the recent events

CSS announces ‘Give Back’ Fridays

Diocesan Pastoral Care of the Sick ministry aided by Appeal

Growing in devotion to the Holy Name of Jesus