NEW BEDFORD — Things take root in the most unlikely places. In the south end of New Bedford, in the parking lot of the Sister Rose Homeless Shelter, rows of raised beds are lovingly nurtured and cultivated with the hope of producing a robust harvest of vegetables.

The master gardener is Robin Muise. In winter, she dedicates her time and talents organizing volunteers to work at Catholic Social Services’ overflow shelter during the cold and inclement weather. In spring, summer, and fall, she oversees the planting, growing, and harvesting of the garden.

“This year there will be a bounty of tomatoes,” said Muise as she prepared plants in individual pots to give to neighbors. “Last year we had cherry tomatoes and people were eating them right off the vine. We are grateful to our neighbors who support the work of the shelter, so we are giving back.

“Over the past three seasons, this garden project gave away about 150 plants. Last year, we also began to give away the produce to patrons of the Soup Kitchen and to the Sisters of Charity.”

Raymond Duarte, shelter manager, stated that, “approximately 600 pounds of harvest were shared with the community, and were also integrated into the meals at the Catholic Social Services’ shelters and the on-site Soup Kitchen.” Prior to entering human services, Ray studied agriculture. He started the Sister Rose Shelter Garden in 2016, with one raised bed, to “teach the community and our shelters the importance of sustainability.”

Just as the garden has grown, so has the number of gardeners. Duarte said that sometimes the shelter guests help weed and tend the garden. Muise has recruited some “amazing volunteers”, including Ann and Bob Marklin from St. Anthony’s Parish in Mattapoisett, and her own husband Peter. Muise stated, “Volunteer Debi Taft is the beast of weeding! She can weed faster than anyone I’ve seen, right down to those big long roots.”

The amount of community support has also flourished since the garden began. Bristol Community College’s Sustainable Agriculture program donated all the seedlings, and volunteer students from the Groundwork Southcoast Green Team come to help weed. Round the Bend Farm in Dartmouth and their expert herbalist Benoit Azagoh-Kouadio provide information on keeping the garden organic, and help with the composting and the planting.

In addition, Muise applied for a community mini-grant from the United Way of Greater New Bedford and was given $1,400. This money allowed for the purchase of many of the plants and the scale. The funds also were used to created posters for the Soup Kitchen and flyers in different languages about nutrition.

Muise stresses the importance of “establishing connection with the earth and watching things grow strong and healthy.”

Duarte believes that gardening “nourishes the body and feeds the soul to grow to our true human potential.”

This parallels what the staff and volunteers try to do at the shelter for people whose lives have been “uprooted” by homelessness: connect with them, ground them, and give them resources that nurture and support to promote sustainability and self-sufficiency. 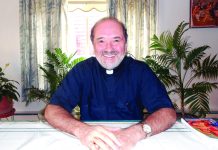 Bishop da Cunha marks 40th anniversary with much to celebrate 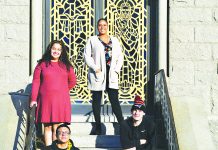 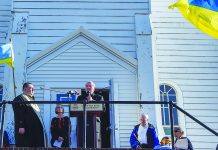 Diocese raises more than $250,000 in collection for Ukraine

I guess I’m a goat

With Christ as co-pilot, priests bring blessings during diocesan flyover

Protesting on both knees