FALL RIVER — The Fall River Diocese recently lost two beloved priests; one shortly before and one after Christmas Day.

Born in New Bedford, he was the son of the late Ambrose and Nora (Sparrow) Smith.

Msgr. Smith attended St. Mary’s Seminary in Baltimore, Md., and was ordained to the priesthood on April 25, 1959, by the Most Reverend James L. Connolly at St. Mary’s Cathedral in Fall River. Following his ordination, he served as parochial vicar at St. Patrick Parish in Wareham and St. James Parish in New Bedford. He also served as temporary administrator to Corpus Christi Parish in East Sandwich and pastor of St. John the Evangelist Parish in Attleboro. He was diocesan director of Vocations from 1968 to 1997.

In 1987, he was raised to the rank of Prelate of Honor by His Holiness, Pope John Paul II. In 1989, until his retirement in 2006, he served as pastor of St. Pius X Parish in South Yarmouth. During his time in active ministry, Msgr. Smith also served as chaplain of the Serra Club of Attleboro, the St. John’s Council #404 of the Knights of Columbus of Attleboro, and assumed the responsibility of the Newman Chaplaincy at Southeastern Massachusetts University in North Dartmouth.

He also served as moderator of the Catholic Nurses of the Cape and Islands District, and was a member of the Council of Priests, College of Consultors and Episcopal Vicar for the Cape Cod and the Island Deanery of the Diocese of Fall River.

He is survived by many nieces, nephews and brother priests.

Father Paul T. Lamb, 84, a retired priest of the Diocese of Fall River and chaplain of the Sovereign Military Order of Malta, died on December 23.

He is predeceased by his parents, Leon and Evelyn (Smith), and survived by his cousins Nelson (Joanne) Lamb of Wilmington, Del., and Doris Bea Campbell of Pawleys Island, S.C.

A native of Washington, D.C., and alumnus of Notre Dame University (1959), “Terry” (as he was known to his relatives and close friends) served in the U.S. Army and later worked as a stockbroker before discerning a vocation to the priesthood.

After graduate studies at The Catholic University of America in Washington, D.C., and Holy Apostles Seminary in Cromwell, Conn., he was ordained a priest at St. Mary’s Cathedral, on June 8, 1996, by Bishop Sean P. O’Malley, OFM Cap. Father Lamb served as parochial vicar at Holy Trinity Parish in Harwich and twice at St. Francis Xavier Parish in Hyannis; chaplain of Morton Hospital in Taunton; and pastor of St. Rita Parish in Marion until retiring in 2007.

The wake will be held in St. Francis Xavier Church, 347 South Street, Hyannis, January 10, at 9:30 a.m., and the Funeral Mass will be celebrated at 11:00 a.m. On Tuesday, January 18, a memorial Mass will be held at St. Bartholomew Church in Bethesda, Md., with burial following immediately at St. John’s Forest Glen Cemetery in Silver Spring, Md. 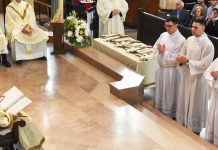 The other side of a choice

Praying for peace and for souls

Eleven diocesan seminarians gear up for another year of classes

The most beautiful church in the world

Green side of the grass