ATTLEBORO — The Attleboro 40 Days for Life ministry began its 28th consecutive campaign on Ash Wednesday, March 2, and will continue until Palm Sunday, April 10. It seems only fitting the fight for all life, from conception to natural death, coincides with one of the holiest seasons of the Church.

While it is very inspiring that the Attleboro campaign has remained faithful and vigilant to the Pro-Life message, it’s a sad commentary on society that such a campaign is necessary in the first place.

In a message to friends and supporters of the Attleboro campaign, Ron Larose, director, and Angela Chaves wrote, “We are looking forward to seeing all our faithful supporters who have joined us in witness and prayer as we end our 14th year of prayer and fasting for an end to abortion.

“We stand united for life with 588 other campaigns worldwide who will be joining us in our small corner of the vineyard at the last remaining abortion clinic in the entire southeast region of Massachusetts. Our Supreme Court is in the process of ruling on a Mississippi case that would ban abortion at 15 weeks. More importantly, the decision could end all Federal abortion rights as they exist today.”

The Attleboro campaign will conduct an opening prayer service on March 5 at 8 a.m. at Four Women Clinic, 150 Emory Street in Attleboro (about one mile from La Salette Shrine).

The service will officially launch the latest campaign that includes maintaining a peaceful vigil across from the clinic daily from 6 a.m. to 6 p.m. “I have plenty of signs to hand out for your use during the campaign as well as other literature from the National campaign for your use,” Larose told The Anchor.

As in the past, the peaceful vigil will be held in the public right-of-way known as Angell Park, just outside the clinic.

Also, as in the past, all prayer vigil participants are asked to conduct themselves in a Christ-like manner at all times.

Larose also told The Anchor that the Attleboro website at 40daysforlife.com/attleboro is up and running. On it includes a vigil calendar where people can sign up for a specific hour during the campaign.

The website also continues links to the national 40 Days For Life site, including campaign flyers and additional information about the nationwide campaign.

In addition to accessing the website, those interested in obtaining more information about the local campaign can contact Larose at 40dflattleboro@comcast.net or calling 508-736-9813. “Learn more — get involved — and sign up for prayer times by visiting our website,” the local campaign flyer reads.

Larose and Chaves added, “Please consider spending time in prayer and fast with us this Lent as we continue our faithful witness to the Gospel of Life. We extend our heartfelt thanks to all those who have most generously supported us in the past and continue to do so. God bless you for all you do on behalf of the unborn.”

The National 40 Days For Life campaign explains folks “can protect mothers and children by joining this worldwide mobilization to pray and fast for an end to abortion.

“Through prayer and fasting, peaceful vigils and community outreach, 40 Days for Life has inspired 1,000,000-plus volunteers.”

The proven results are indeed inspiring and shed some optimism in the fight against the culture of death. In 26 coordinated campaigns, more than 20,000 babies were saved from abortion; more than 200 abortion workers converted; and more than 100 abortion centers closed.

In past Anchor accounts of the Attleboro efforts, the request has been, and still is — if you cannot join the vigil, you can participate at your own parish or con­gregation by praying and fasting for this most im­portant cause.

Many states, including Massachusetts, are advancing legislation to allow abortions. The support of area faithful is needed as much now as it ever has been.

The SMaSHing success of Catholic education and tradition

Members of diocese invited to virtual Biblical walk through the Mass 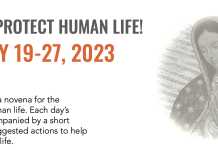 Mass of remembrance for St. Mother Teresa to be celebrated at...

Just call me your normalness

Crisis in the Ukraine