Ever since the confirmation of Amy Coney Barrett to the Court in 2020, there has been a bare majority (5-4) of practicing Catholics on the Court, which is unusual given that for most of our history there was a solitary Catholic seat on the Supreme Court.

At one level, of course, a judge’s religion shouldn’t matter. Under Article VI of the U.S. Constitution, “no religious Test shall ever be required as a Qualification to any Office of public Trust under the United States,” and that includes all federal judges. A judge is supposed to decide cases according to the Constitution and laws of the United States, impartially and without fear or favor.  In that sense, justice is rightly portrayed as blind, meaning that the law should be applied irrespective of who someone is, and that everyone is equally bound by the law, Catholics and Protestants, Jews and atheists.

The law is supposed to be applied evenhandedly, so that our government will be one of laws rather than of men and women, all of whom are subject to the law. A Catholic judge has to be a good judge in a way that can be appreciated by people of any faith or of no faith. Given our constitutional commitment to freedom of religion and a certain separation of Church and state entailed by the establishment clause of the First Amendment, a Catholic judge cannot simply decide cases according to Catholic moral principles and social teaching. That would be a kind of Catholic sharia, which Vatican II’s Declaration on Religious Freedom ruled out of bounds.

But, of course, a judge should be true to his or her conscience, and in the case of a Catholic that should be a religiously informed conscience. If ever the Constitution or laws required something that the judge could not conscientiously follow, then he or she would have to recuse themselves from the case and even resign from office, as the heroic example of St. Thomas More teaches us.

Justice Antonin Scalia was a devout Catholic who is also the Court’s best writer ever. “I’ve been praying the Rosary every morning on my way into the office,” he told his son, Father Paul Scalia. He criticized the Court’s invention of a right to abortion, saying that the Constitution said nothing on the subject. He generally favored expressions of religion in the public square, though he also authored the 1990 decision in Employment Division v. Smith which essentially invalidated constitutional exemptions for religious exercise from generally applicable laws. His jurisprudence was in favor of the death penalty, sidelining recent Catholic teaching on the subject. His originalist views on constitutional interpretation, together with his focus on the actual text of laws, as opposed to legislative history, have been quite influential. But it also must be admitted that his jurisprudence tended to sideline natural law thinking in order to emphasize written texts at their most specific level.

Justice Anthony Kennedy, who retired from the Court to be replaced by Brett Kavanagh, was a California Catholic appointed by Ronald Reagan. He would become a terminally swing vote on the Court, most influential in reaffirming Roe v. Wade in Planned Parenthood v. Casey in 1992, and in expanding gay rights and creating a constitutional right to same-sex marriage in Obergefell v. Hodges in 2015.

Justice Clarence Thomas, the longest serving current member of the Supreme Court, is also a committed Catholic. He attended Catholic seminary for a while, but fell away from the Church only to come back with a passion: “I am decidedly and unapologetically Catholic. It is this faith that has been the guiding beacon during some difficult and seemingly hopeless times, even when I had turned my heart against Him and turned my back. I have no doubt that this faith will do the same for each one of you,” he told graduates of Christendom College in 2018, “if you let it, and perhaps even if you don’t. It is not a tether. Rather, it is a guide — the way, the truth and the life.” He has argued for the overturning of Roe, and was in dissent in the same-sex marriage decision. He wrote the majority opinion in the recent decision vindicating the Little Sisters of the Poor against the contraceptive mandate, though that litigation continues under the Biden Administration.

Chief Justice John Roberts, a Catholic from the Midwest, is generally conservative in his judicial philosophy, and he was one of the four dissenters from the same-sex marriage case of 2015. To me, he seems over-concerned about the short-term prestige of the Court, and so he has striven to overrule as few cases as possible and distinguish precedents, often in trivial and non-consequential ways.

Justice Samuel Alito, a New Jersey Catholic, has been a reliable friend of religious freedom at the Supreme Court. That is important, for it is the First Amendment that Catholics and other people of faith must rely on in defense of their religion in the face of an increasingly hostile society in the West.

Justice Brett Kavanagh is another Maryland Catholic (as am I), and he was confirmed after the most scorched-earth confirmation process in history. It is too early to tell what kind of Justice he will be, though he, too, is a practicing Catholic.

Justice Amy Coney Barrett, the most recent member of the Court, was a professor at Notre Dame Law School, went there for law school herself, and has been involved in a Catholic charismatic community. Again, it seems too early to say what kind of a justice she will turn out to be from a Catholic perspective, though one can certainly hope for the best.

In conclusion, we end with a mixed picture of Catholics on the Supreme Court, which is somehow related to the parable of the wheat and the weeds that Jesus gave for the Church itself, at any one time composed of sinners as well as saints. Hopefully, in this season of Lent we can pray that all the justices do justice on the Supreme Court, Catholics and otherwise, and that we all might one day be in that number, when the saints go marching in.

Anchor columnist Dwight Duncan is a professor at UMass School of Law Dartmouth. He holds degrees in civil and canon law. 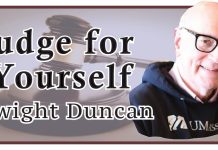 ‘Four Spaniards and a Saint’

The background of The Little Sisters’ faithful religious practices

The other side of a choice

Diocese raises more than $250,000 in collection for Ukraine

Care for the sick