EASTON — For the first time in three years, diocesan women and men will again gather for a day of prayer, praise and inspiration at the annual Women and Men’s Conference sponsored by the diocesan Secretariat for the New Evangelization. The primary focus will be the sacredness and importance of the most Holy Eucharist in lives of the faithful.

The conference, themed “Receive Jesus. Worship Jesus.,” is open to all and will take place on March 10 at the Ames Sports Complex on the campus of Stonehill College in Easton.

“There will be a very powerful and prayerful presence this year focusing on the Eucharist,” as part of the national three-year Eucharistic Revival initiative,  Beth Mahoney told The Anchor. Mahoney is the chairperson of the committee for the event, and principal of St. Stanislaus School in Fall River. “We have three very dynamic speakers sharing topics to provide those in attendance with a better and clear understanding of how receiving the Eucharist nourishes us and brings us into a better relationship with God.

She added that after two years of COVID restrictions, “We are so grateful… face-to-face again. . And there couldn’t be a better main theme than that of Christ’s true presence in the Eucharist.”

The speakers this year will be Fall River Bishop Edgar M. da Cunha, S.D.V., who has routinely spoken about the Eucharist’s importance in our lives since the beginning of the launch of the National Eucharistic Revival that began on the feast of Corpus Christi, June 19, 2022. That initiated a Year of Diocesan Revival that will run to June 11, 2023; followed by a Year of Diocesan Revival from June 11, 2023 to July 17, 2024; ending with a Eucharistic Congress from July 17-21, 2024 where 80,000 women, men and children will gather to consecrated themselves to the Holy Eucharist.

Also speaking will be Mari Pablo, a well known dynamic singer and presenter at the annual Steubenville Youth Conferences, NCYC, NET, Life Teen events, FOCUS conference, diocesan events and more. She says she has a deep love for Christ and is dedicated to helping others encounter Him.

The conference will also welcome back to the diocese Father Roger Landry, was the Holy See’s Permanent Observer Mission to the United Nations, and is now concurrently Catholic Chaplain at Columbia University in New York, interim executive editor of The Anchor, and has  been designated by the United States Conference of Catholic Bishops one of 56 national Eucharistic Preachers.

“I’m super happy to be able to come to this year’s Conference to speak about the gift of Jesus in the Eucharist within the context of the National Eucharistic Revival, one of the most important initiatives of the Church in the United States in decades,” Father Landry told The Anchor in an email from the Vatican where he was a commentator on EWTN for Pope Emeritus Benedict XVI’s funeral. “More than that, Jesus — God in the flesh, under the miraculous appearances of bread and wine — Himself will be present at the Conference. After eight years working outside of the diocese, I’m really excited about seeing so many friends and being home for a little while with Bishop da Cunha and my brother priests to talk about the greatest treasure in the world.”

“Father Landry’s Eucharistic mission in the diocese won’t end with the conference,” added Mahoney. “The following week, he will be delivering a message of the importance of the Eucharist to diocesan school children during the day, and visiting parishes in the evening.”

Mahoney also told The Anchor that the conference committee is very excited to be able to display two holy relics; one of Blessed Carlo Acutis.

The website of Blessed Carlo says, “Carlo was born May 3, 1991, in London. His family moved to Milan shortly after. From a young age Carlo developed a love and reverence for the presence of Christ in the Eucharistic. He attended daily Mass frequently and eventually convinced his parents to attend Mass.”

As most young people his age, Blessed Carlo had a great affinity for computer games and programming. Yet he didn’t just use that passion for entertainment, he developed a website about Eucharistic miracles around the world (www.miracolieucaristici.org), an interest he developed from hearing stories from his grandmother.

In 2006 he was diagnosed with an incurable leukemia and died in October of that year. His life’s mantra was “The Eucharist is my highway to heaven,” and he spent his brief time on earth helping others to see that. He was declared Venerable in 2018 and a Blessed in 2020.

Blessed Carlo’s Eucharistic Miracles Exhibit will be available for viewing at the conference.

The other relic is that of St. Manuel Garcia. According to the National Eucharistic Revival website (eucharisticrevival.org): “He was born in Seville on the 25th of February 1877. He entered the Minor Seminary of Seville on September of 1889 where he wrote: ‘If I would be born a thousand times; a thousand times I would be a priest.’

“He was ordained by Blessed Cardinal Spínola, the founder of the newspaper El Correo de Andalucía, where he worked when he was still a seminarian. In September of 1901, he celebrated his first Mass at the Church of the Holy Trinity and entrusted himself to the intercession of Mary, Help of Christians.”

St. Manuel was sent by the Archbishop of Seville to Palomares del Río, a beautiful and secluded village of Aljarafe, but upon his arrival no one came out to meet him. The church was greatly abandoned: filled with dust and dirt, cobwebs inside the tabernacle and torn altar cloths. Upon seeing this situation, he knelt before the altar and thought about the many abandoned tabernacles in the world. This prompted him to start the “Eucharistic Reparatory Union.”

At the age of 28, he was sent to Huelva where he saw many children in the streets. Later on, he devoted his attention mainly in founding schools and teaching catechesis with the help of his parishioners.” He died in 1940 and was canonized in 2016.

In addition to the speakers and following breakout sessions in English, Spanish and Portuguese, there will be Adoration, music, Reconciliation, morning refreshments, lunch, and vendors. Bishop da Cunha will celebrate a closing Mass at 4 p.m.

Plan to join Catholics from throughout the Diocese for this day of spiritual renewal and enrichment during Lent. Register by January 23 for an early bird discounted fee. Visit www.fallriverdiocese.org for details.

Posters and hard copy registration forms will also be delivered to all parishes in the diocese. Parishes and groups are encouraged to consider bus trips to and from the event. Further information will appear in future Anchor editions. 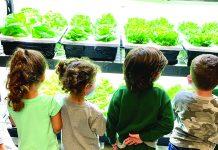 I had tinsel duty

Handing down the faith at church